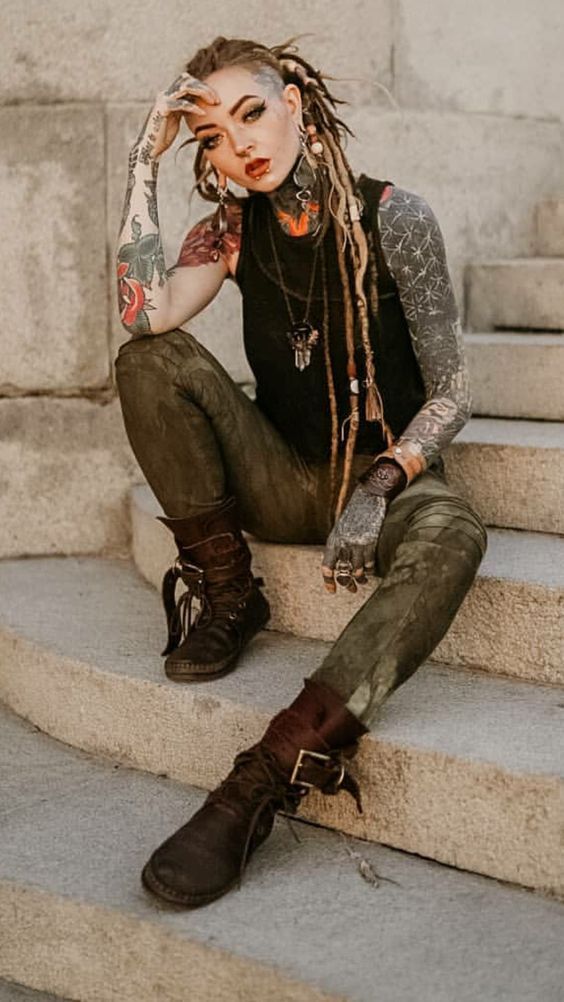 If ever there were a woman who seemed to stand out, it would be her. Standing at around 5’5”, with an athletic build, almost every inch of visible pale skin is splashed with tattoos, her ear lobes stretches and gauged most times, her long fiery red hair dreadlocked and decorated with beads, trinkets, and feathers, sky blue eyes, and her fingertips ending in strong looking nails that are kept an inch long, painted glossy black and filed to points. She tends to dress in earthy tones, loose clothing that seems to flow about her person, oftentimes sporting geometric or tribal designs, and leather boots with two-inch heels. When she speaks, her tone is normally low energy, almost bored in a way.

The Faun Witch’s mien is a far cry from her mask. Her skin is almost porcelain white, her dreadlocked hair a stark silver, trinkets, and small animal bones woven into the braids. Her legs are digitigrade and covered in grey, coarse shaggy fur like a goat, her feet replaced by cloven hooves. Black horns curl from the sides of her skull, and goat-like ears poke out from her hair. Along her shoulders and the backs of her arms, copper snake-like scales can be seen, and ruby red cat-like eyes stare out from her face, her nose bestial. Behind purple lips lurks a fanged maw, and her hands end in fingers that are longer than human and tipped with wickedly curved talons.

The light seems to almost change in her presence, becoming almost dusk-like. Open flames have a tendency to flicker and sputter ever so slightly, and there is a slight coolness around her, like the last vestiges of the Summer months beginning to give way and decay to Winters bitter cold.

Simone is a ‘New Age Guru’ of sorts for mortals and those she deems ‘The Uninformed’, and will sell useless trinkets out of stalls as ‘talismans of good fortune’, potions, poultices, and other goods, as well as telling fortunes with tarot cards and rune casting, and casting fake spells for money. However, beneath the veneer of fleecing New Age believers, for the supernatural, she may be willing to invoke ‘The Old Ways’ for other costs…should you be able to make it worth her while.

You’ve been asleep for a very long time…(Changelings):