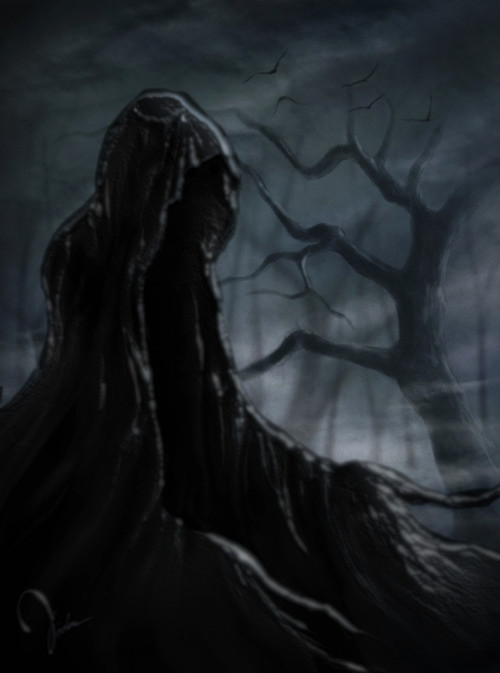 Joseph is thin, tall, and a bit pale. He moves with an odd level of grace, though, very purposeful in everything he does. Typically he wears long sleeved dark shirts and somewhat tight matching jeans, often beneath a large flowing black jacket that seems to accentuate his unsettling aura. Despite seeming at a glance like the sort of person who might fade into the background, he seems quite capable of stepping into the forefront as well, when needed.

The Namtaru’s horror, “The Forgotten,” is a collection of ectoplasm and ephemera formed from the castoff remnants of countless ghosts formed by careless or immoral people. It’s colored a deep gray, just a hair from black, looking vaguely humanoid, shadowy eyes peering out from a “hood” formed of the same substance of the rest of it. Its form occasionally warps and changes, looking like it is or isn’t wearing a full “robe” or having its eyes become more or less visible, its height change, or otherwise just reshaping as the liquid ectoplasm that makes it up shifts around. 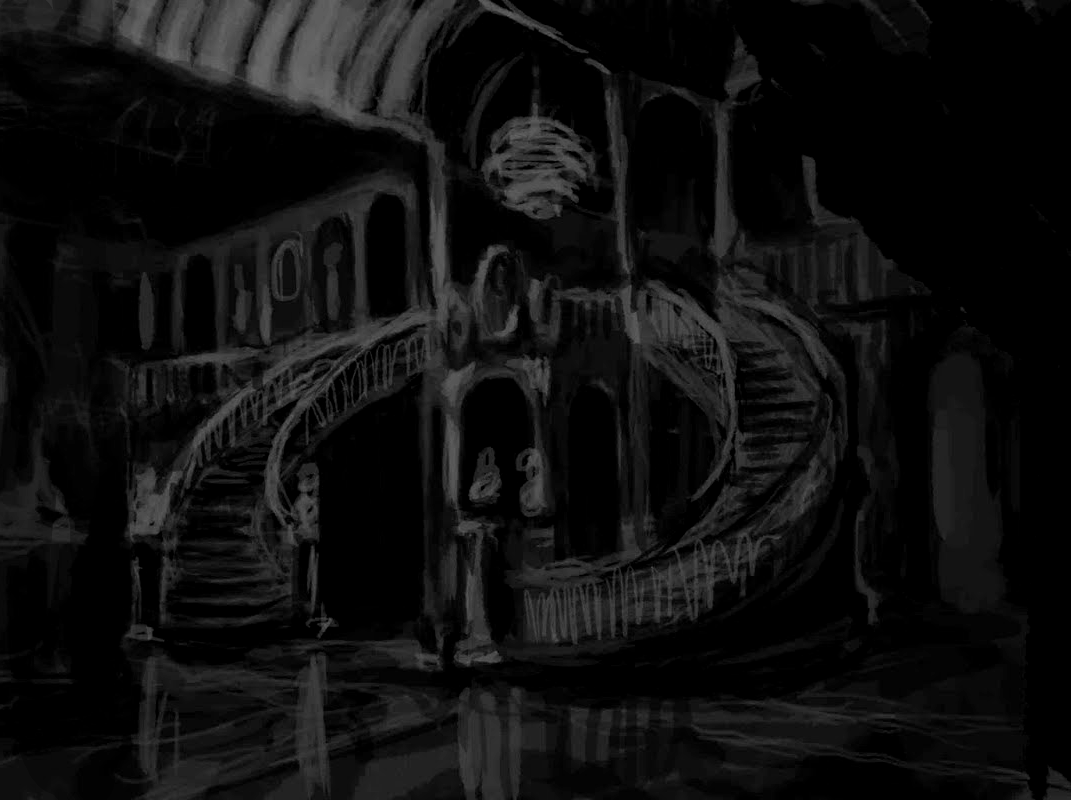 The Heart of The Forgotten’s Lair takes the form of the foyer of a haunted, victorian-style manor, broken down and decrepit, with signs of age along the floors, walls, stairway leading upward, and every door that seems to lead out of the area. The first floor has one boarded up doorway leading further in, and another that’s hanging loosely off its hinges and more visibly leads inward. On the second floor, a few opened doors lead into bedrooms, broken down (but usable) bathrooms, and other basic amenities, although here at least, they’re all fairly small.
Countless ghostly spectres can constantly be seen patrolling the area, grasping hands reaching to take hold of intruders as dim lighting tries and fails to trickle in through the windows, casting no more than an eerie glow to the place.

The first chamber branches off of the foyer’s open first floor doorway down a long, dark hallway with more boarded up archways along each side. End tables, old paintings, and other ruined decorations line the walls. It leads into an old, decrepit looking, but expansive and large dining area, rotted food lining the extended table that reaches across the lengthy room, countless specters stopping to ‘eat and drink’ as they patrol the Lair. Where the ghosts don’t sit, however, the food seems slightly more palatable, and in fact does indeed sate the hunger of living visitors (with the Beast’s permission). Like the foyer, the only illumination is what little starlight can creep through the windows and broken boards along the walls. 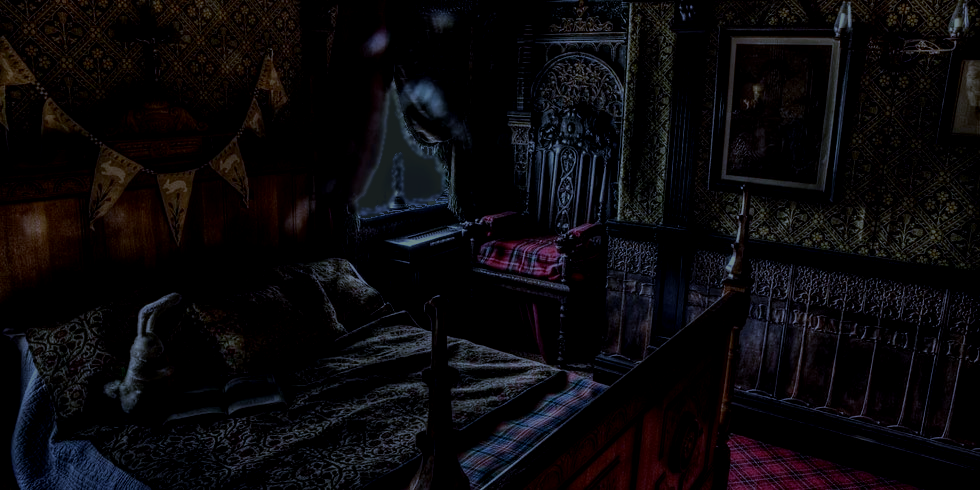 On the opposite side of the dining room, another dark hallway leads into the master bedroom. Slightly less decrepit than the rest of the house, it nonetheless holds dust, cobwebs, and other signs of aging. The bottom area has ruffled furniture and an old grandfather clock in it, ticking away a little more slowly than it should be. A spiral stairway then leads upward to the loft, where the bed itself, an old wardrobe, and bookcases that are currently empty can be found, little spiders crawling across the shelves. On the opposite end of the room, a large, cracked mirror is propped next to the wall, where ghostly faces occasionally stare outward. 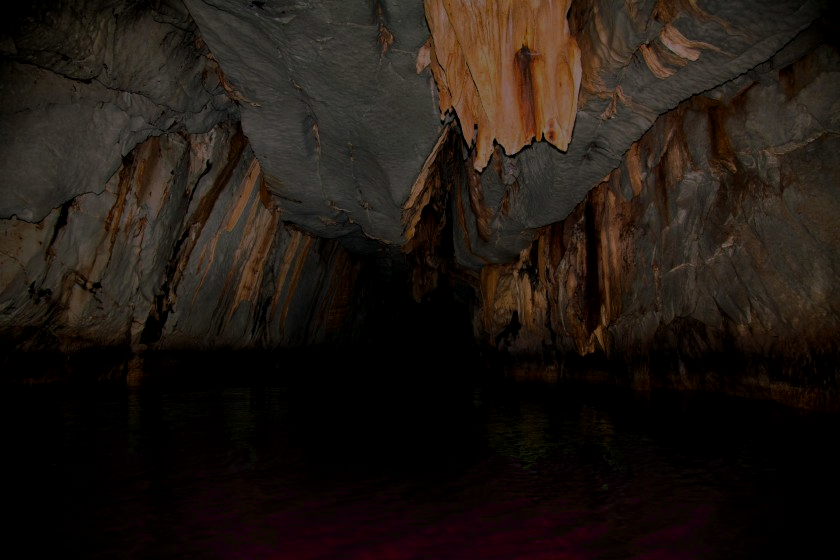 Beneath a hidden hatch in the lofted bedroom, down in the corner and covered by an old rug, is a hidden underground passageway that slowly transforms from cellar-like crafted stone with wooden braces into a sculpted natural cavern. Ectoplasm, rather than water, drips from stalactites on the ceiling and pools eerily near the walls. It opens then, into a large cavern with a stream of blood flowing through it, a little broken down rowboat tied to a stalagmite and seeming to be endlessly battered by the running waters, yet still capable of floating. Collapsed tunnels seem like they could lead outward, but the rocks are too large and too dug into place to be moved. The bare illumination in here comes from some eerily glowing crystals in the walls. 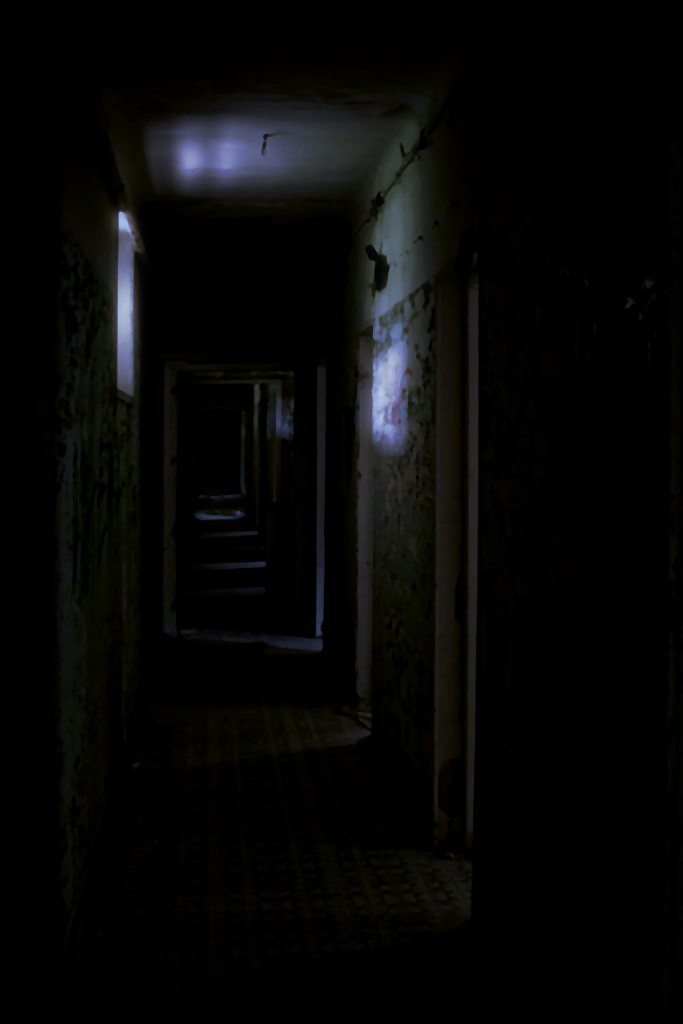 If one heads up the stairs in the foyer of the home, instead, it leads into three long hallways that, like all the others, seem to run between boarded up or blocked off doorways. Unlike the others, however, these three eventually bend around on each other and come together. At that point, a few of the doors here and there start to swing open, hanging on their hinges and leading into smaller, dustier bedrooms that can nonetheless still sleep someone comfortably enough, along with functional (liberally speaking) bathrooms and similar rooms. Unlike the other chambers, the ‘ghosts’ that appear here largely seem to be various forms of animal-like spectres, off in the corners or darting past the shattered windows.

In just about any drawer or cabinet within the Lair, currently, dice, cards, or other small gaming implements can be found, dripping with ectoplasm. As well, drops of blood occasionally fall from above, although looking up provides no obvious source. 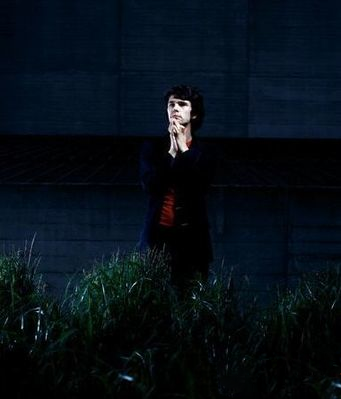 Eye for Ghosts (Anyone ghost-oriented):

Joseph is capable of seeing ghosts, likely not surprising to anyone who knows the nature of his own Horror, and has a tendency to seek out haunted locations (to learn about why they’re haunted).
In particular, he’s also made a habit, as of late, of delving more and more into the Underworld itself, both to align his Horror to it and to learn more about the nature of ghosts and their cosmological place (or lack thereof).

Joseph’s Horror has begun to build a Legend around itself as an unseen predator that passes judgment down upon those that disrupt the weave of destiny by creating ghosts and similar creatures through selfishness or violence. A cult has begun to build around this idea, The Forgotten Threads, who seek to warn and proactively work against those that might cause such breeches in the web of fate, or to help those ghosts that have already been created move on or find peace through whatever means (even if it means vengeance against those that created them).

The Begotten is oddly peaceful… at least among others that are. He seems to have a particular issue with violent crime, as well as behavior in general that leads towards the innocent or downtrodden suffering harm, but has no problem with any other sorts of illicit activity.

He’s known to be incredibly polite and friendly among other supernaturals, and unlike some of his kind seems to be unwilling to force himself into their business without an explicit invitation. Still, he’s very interested in meeting his “cousins” in general, when they’re open to it.