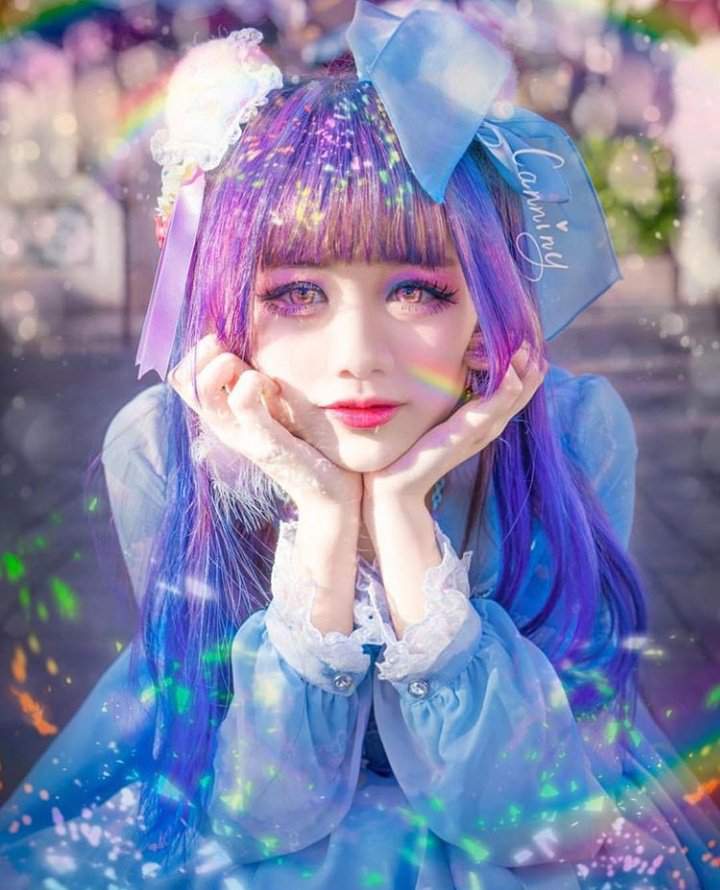 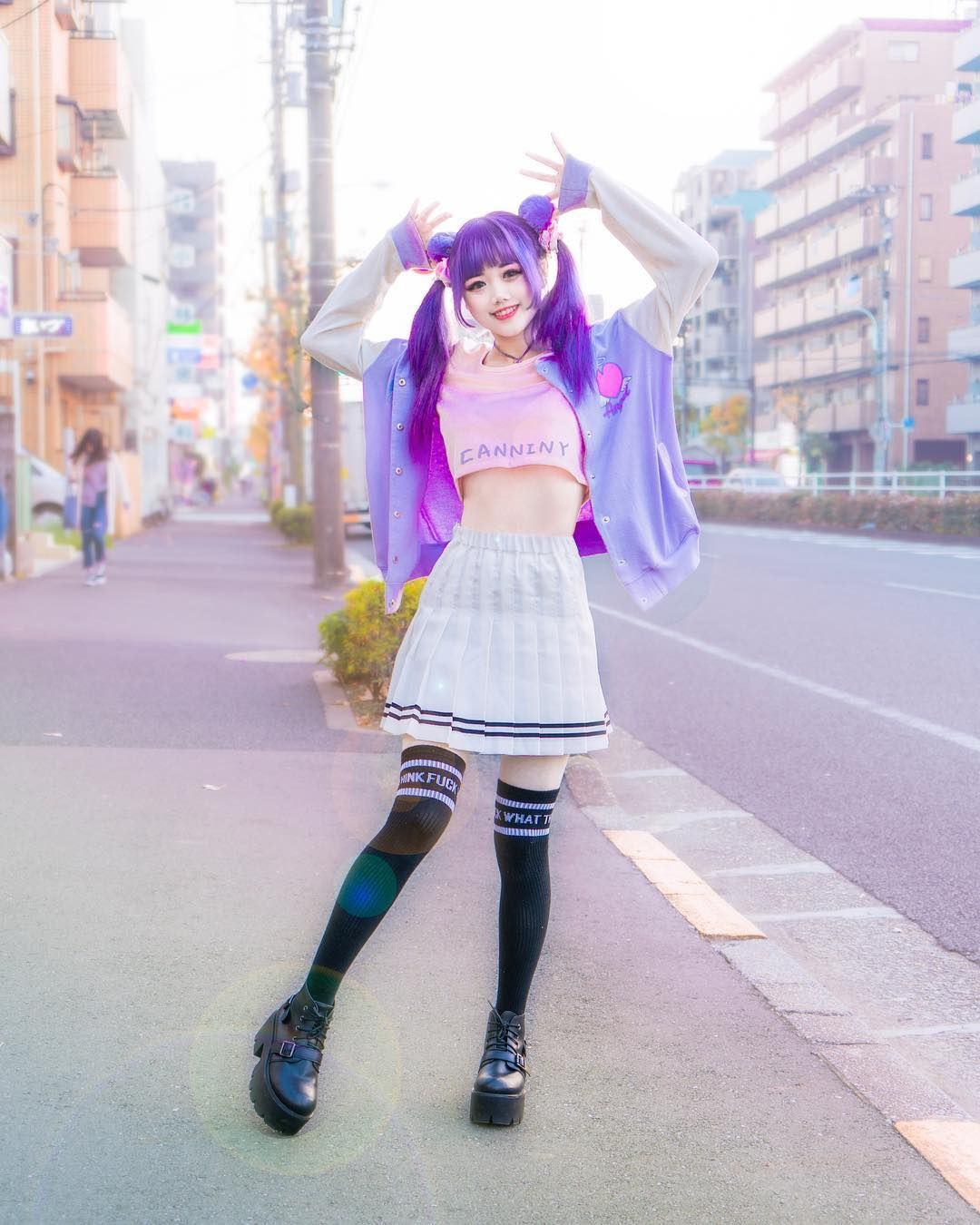 ‘ ’Whenever I stop to think about it I don’t really know what Im SUPPOSED to be. Am I the girl, the little asian girl with the cuban family that everyone sees, that dies ‘her hair all those colors and wears these awesome clothes? Am i a HORSE? Am i all those other things i can be? Am i all of them at once? I don’t even know anymore, I try not to think about it. Thinking about it makes me upset. IM AN IZZY! ‘

Isabella stands out in a crowd immediately. Tall and long limbed, thin and busty, her hair and clothes in a multitude of colors and a wide easy smile she is someone you remember. Round north Chinese features are prominent in her face, which she often makes up brilliantly in sparkles and colors to match her wardrobe. Izzy walks almost a little clumsy with her limbs not quite matching her gait, not unlike seeing a young horse learning to run, its not uncommon to see her fall or stumble.

In her Mien for those that can see its apparent that izzy is an anthropomorphic bicorn with silver fur and flowing hair on her limbs and a soft marvelous tail. Along with her powerful equine body she has a curling horn on her head, and a curved antler above it that actually looks quite deadly were she to impale you with it. A blessing of Spring, she possesses an aura of rainbow colors and sparkles that erupt from her body wherever she moves. Flowering plants erupt and fall from her body and wildflowers seem to bloom in her steps where they land 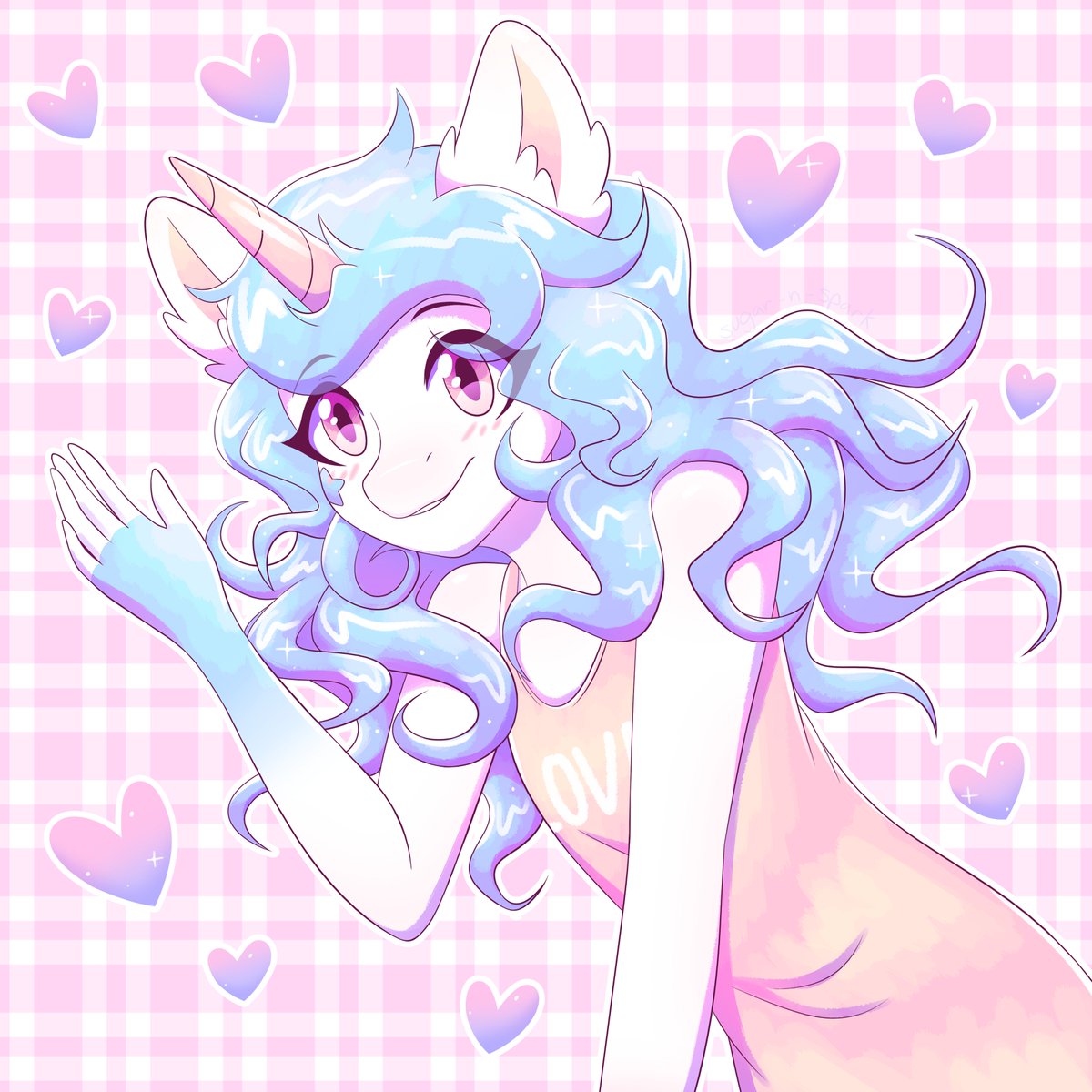 History in the City

“Please don’t ask me to talk about it ok? Im a PLAYMATE. You know what that means right? My time with THEM wasn’t like your time. I know the things THEY do are just awful but they were never awful to me. They liked me, we played together all day. They combed me and rode me and ran me and i was so good. I don’t know why they got rid of me and forgot me, but you all helped me anyway, you didn’t need to but you did. Im your friend now, all your friend. We’re going to run and jump and play and I’ll hit and fight and bleed to keep you here with me and stay my friend. I miss them though. I miss them everyday. Help me think of something else, help me not think at all? Whatever that’s fun you want to do together im totally game but Whatever you do though don’t ask me to talk about it, ok? Dont ask me to talk about THEM. “

The Lost of Miami found her on the street and they took her in, and welcomed her as one of their own even though some of them whispered she clearly wasn’t. She was a Playmate after all, they have a certain reputation. They’re usually rarer in the human side of the world, because they so rarely escape or have any reason to try. They’re pampered. Izzy knew it must have been the same for her, and maybe there was some sort of mistake. Maybe she got Lost, out playing and ran too far! That must be it. One day she ran, out back into the Thorns to find her way home, but no matter how hard she ran she couldn’t find it. She was usually so good at finding things. One of The Princess’ favorite games was hide and seek, and Grace was pretty good at finding her hiding places. She was lost in the thorns, and all hope seemed lost. She was alone, and began to hear howling. Wolves closed in, but before they could attack the freehold came again and rescued her, together they fought the dire wolves and Izzy learned too just as her rescuers how strong a unicorn could actually be, and how thrilling and amazing the heat of the fight was. It was something unlike anything at home, there was never any fighting there at all. There was never any of the pleasures she found celebrating with one of her rescuers that night either in the Princess’ palace.

This world had its charms she had to admit, and its people had her gratitude. She learned their stories, and the injustices they suffered and that’s when she decided she would stay with them. She would play and fight and love with them, and try her best to remember what it was like to be a human as apparently they all once were. She Swore their promises and put the past in Arcadia behind her. She was helped to find who she once was, and helped destroy the doll left in her place. She cried to break something that once belonged to HER but when she did, she remembered, REALLY remembered her name. She stays with friends in the freehold now, and has the time of her life doing it. She has to after all, every moment she pushes to be the best moment, because in those moments of awful quiet and stillness she can almost hear the voice of a Princess.

its a PROBLEM. Izzy just can’t keep her mind on anything for more than five minutes unless it’s fun. She can’t sit still, she can’t stop and think, and she can’t stick to a routine to save her life. She’s tried, but can’t manage to go to school and get a proper education (something someone taken as an elementary school kid could sorely need), she can’t hold a steady job, and she would forget her head if it wasn’t attached to her. On the other hand her tendency to wander leads her to the wildest adventures, and into the most unlikely places. Like the time she broke into unlicensed MMA fighting. Or the time she figured out shes a natural behind the wheel and started street racing and won this awesome bike. Or the time she got lost in a fetish club and forgot what a safeword was. It’s almost like she is running away from something, or wants to think of anything else but what’s on her mind

Izzy, after long times searching for her calling has found it as Empyrean Farms own animal handler extraordinaire. The most gentle bee keeper, bird keeper, horse trainer, pest remover, and even veterinarian anyone could ever find izzy uses her special gifts with animals to keep them happy and healthy. If you have any questions concerning animals Isabella the unicorn might have solutions

she might be a cute little horse with a horn but when the time has come Izzy can hit like… Well a horse with a sharp deadly horn. She was courted by the Summers for awhile for her strength and ferocity in the heat of a moment but she decided in the end that outside of the moments when she needed it anger just didn’t taste great in her mouth. She’s still game for a fight though, for missions or just for fun. Just don’t blame her for getting knocked on your butt by a princess toy. She’ll kiss it and make you feel better too. In recent nights her recognized prowess in battle and her talents for navigation in the hedge have earned her the title of Claviger, protector and champion of the Verdent Court

izzy is a shapechanger, her skin fluid between a few different Beasts and traits belonging to them. Just as frequently as she might be in her human form she’s at home in other shapes too, and in so many places. Some might say she seems more natural in a beasts skin than a person’s, and maybe they’re on to something. 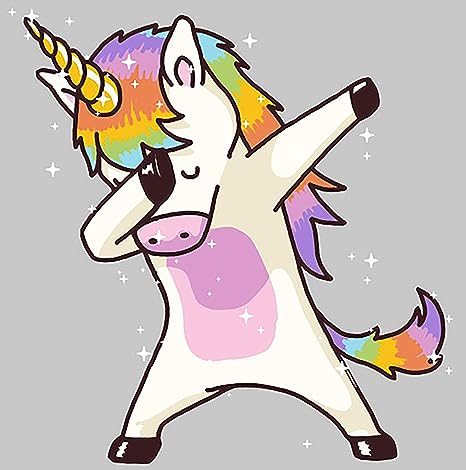 “Izzy is very important to me. Put us together and it’s like having Pinkie Pie stand next to Wednesday Adams, but that’s part of the reason we are so good with each other. That old phrase ‘Opposites attract’ really sits properly with our relationship.” -Marci Carnisera.

“I never believed in friendship at first sight until I met Isabella. She warms my heart and soothes my soul.” - Anastasia

“I had no idea meeting her at the bar that night that she would change my life, but I suppose I should have known. Her light draws me, just as much as it draws everyone else. I can’t imagine my life without her in it.” -Etta Tyler

“Izzy is a rainbow incarnate, living art born of a heart that will be young forever. I am forever grateful she found me when I was lost.” -Sidonie

“She doesn’t just have a heart,she -is- all heart. Joy,love,trust and the willingness to care so much for others,she puts herself last.That’s what makes you rare,Unicorn.” Juan Perez