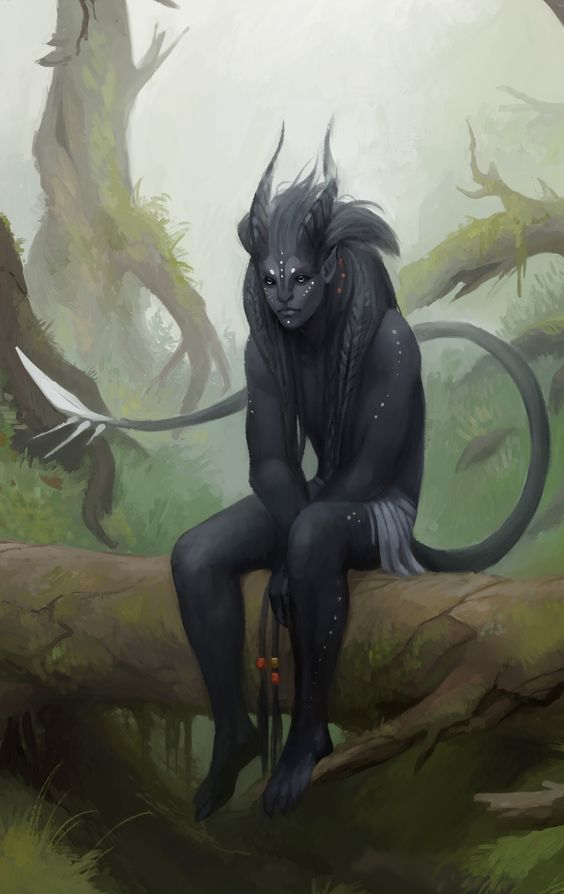 Demarcus stands around average height at 6’, although his posture and presence belies something powerful there. His hair is cropped short, and his features youthful. There are a few nicks and cuts over his body, and all but a one is superficial. Across his arms are a litany of tattoos, each of them depicting a fantastical beast. He packs on muscle, although never enough that he could be mistaken for a brute.

He carries himself with pride, and an upright posture. No slouching, no averted gaze, and never a hint of shyness. Forward. Direct. His style of dress errs towards comfort over fashion, although he does dress well enough when an occasion demands it.

The shadowy, ever-hungry dćmon that is Demarcus’ Horror is as unassuming at a glance as the man it represents. Gleaming yellow eyes and large horns are the easiest things to identify. He stands no more than 6’ tall, but his presence shifts and changes the world around him to make him appear larger. The very weight of his existence warping through space and time around his very being.

Demarcus was attending The U for a degree in elementary education from 2013 to 2015. When asked about his departure he always claimed stress and depression. He did seem much more relaxed, if odd, after leaving.

How Late Are You? (Everyone):

As a library technician Demarcus is usually the first face folks see in the library, although he isn’t an outright librarian. He works for the MDPLS, and works out of Coral Gables Library.

He watches. Things. People. Places. All are under his eye at one point or another.

Do you suffer from nightmares as your own thoughts turn against you, and every memory is a potential enemy?

He is never lost and is always learning. Despite his age he is a student of all life has to offer in its darkest corners and brightest havens.

Demarcus is always up before the crack of dawn, and usually seen taking a jog around the park or from home to one of his favorite shops.

Demarcus does not hide his true nature among kith and kin. He will often seek out those that have newly gone through their rebirth through the Dark Mother, and question them on all manner of things.

Like many Beasts, Demarcus is looking for family ties after a fairly recent fallout.

Hearth and Home (Everyone):

Demarcus’ apartment is far too expensive for him to live on his own, and his latest roommate left after a rather explosive altercation. He’s put out a few ads here and there along with word of mouth among friends.

Something Wicked This Way Comes (Supernatural):

Demarcus has an aptitude for the superstitious, ontological, and magical. He loves learning of new magicks, and is willing to teach what he knows if able.