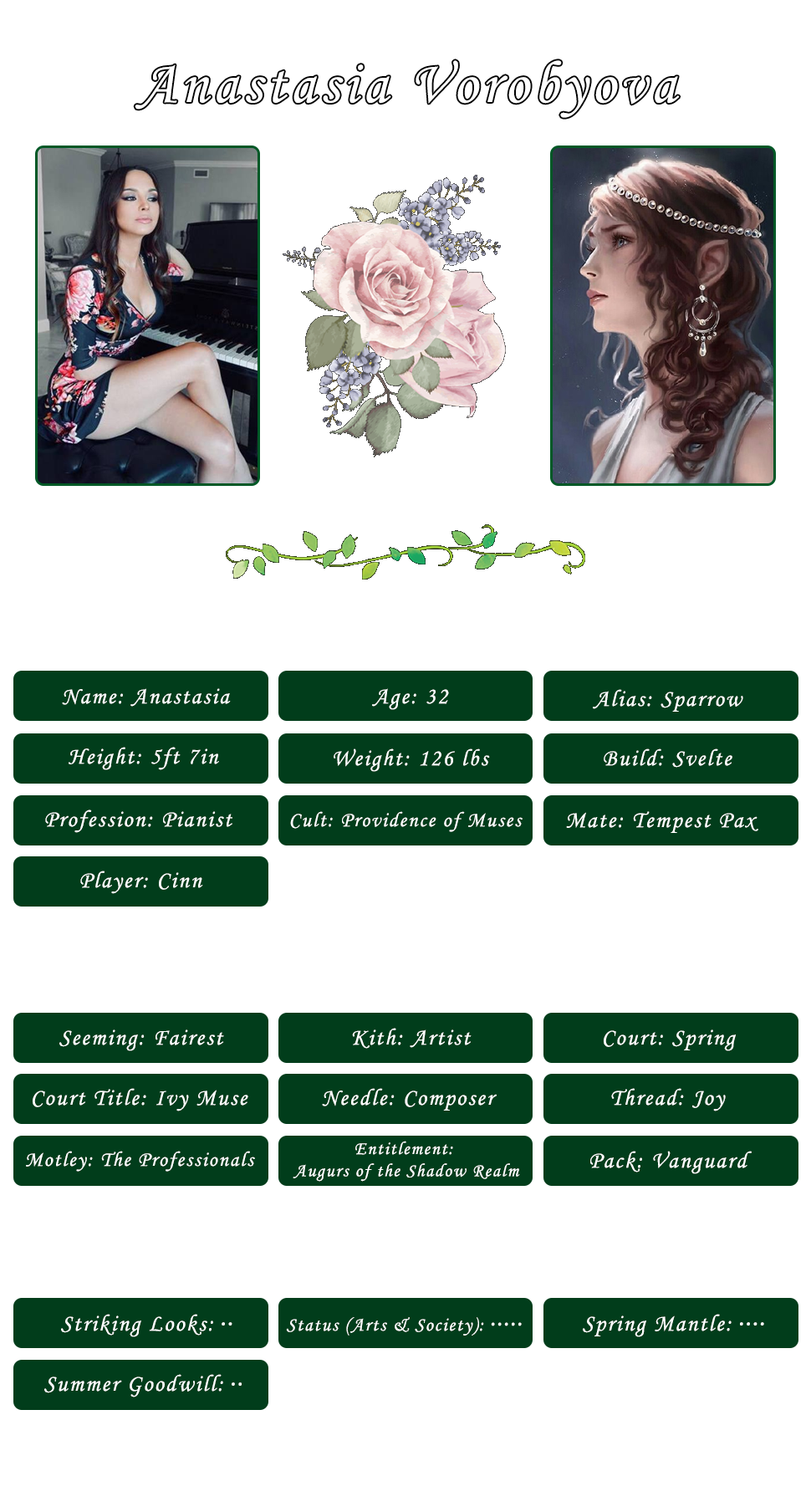 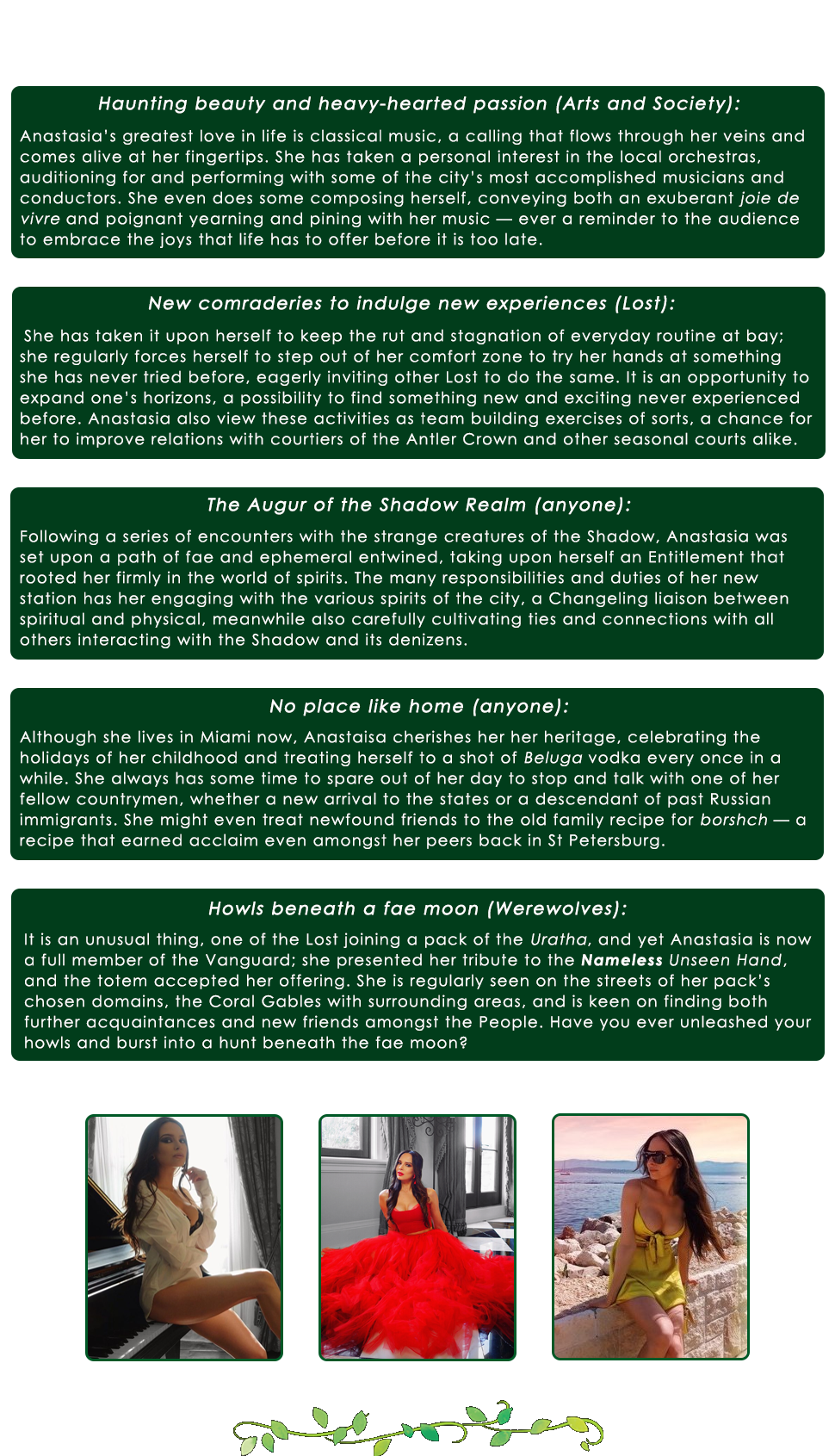 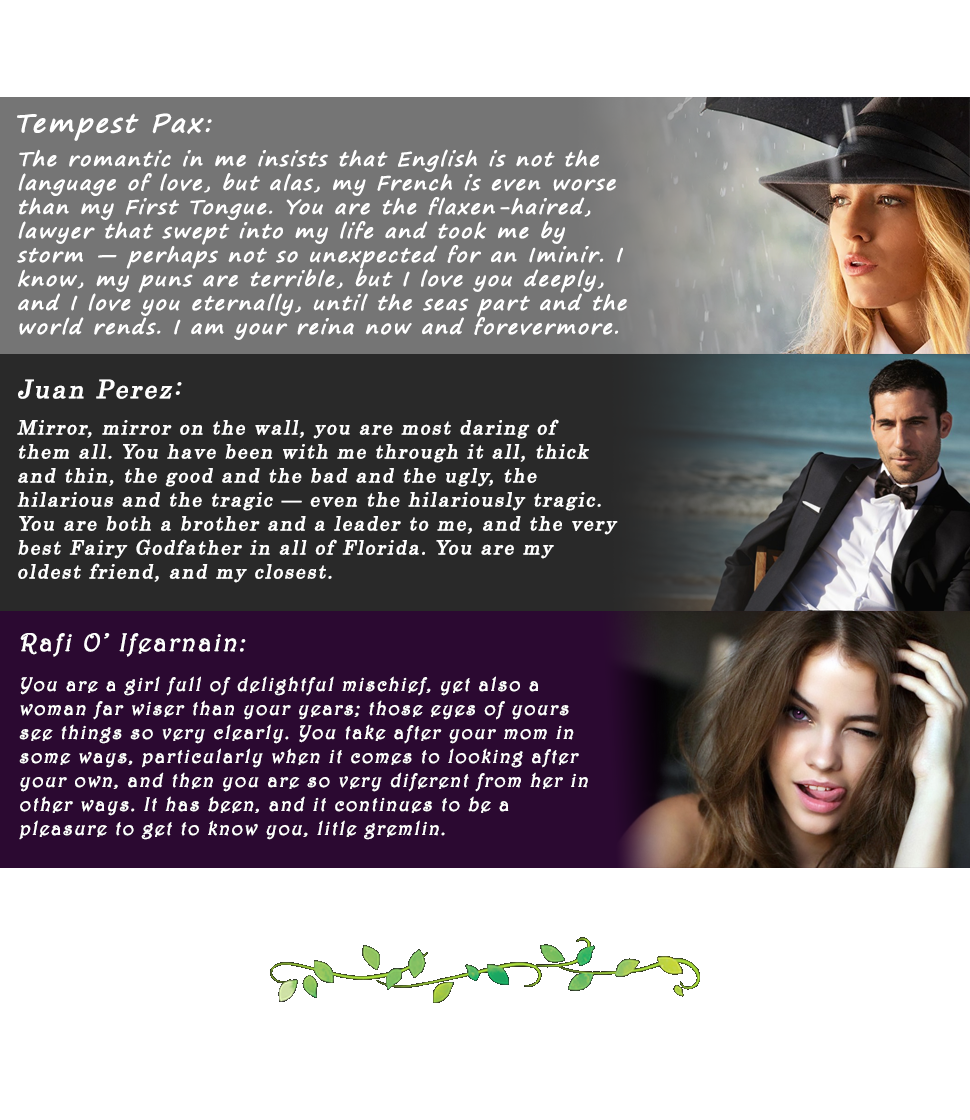 “And those who were seen dancing were thought to be insane by those who could not hear the music.” — Friedrich Nietzsche

“Fair is the moonlight and fair the wood,
But not so fair as the place I come from.
Why did I leave it, the beautiful country
Where Death is only a drifting Shadow?
O face of Love, of Dream and Longing,
There is sorrow upon me that I am here.
I will go back to the Country of the Young,
and see again, the lances of the sidh
As they keep hosting with laughing cries
in pale places under the moon.”
— Fiona Macleod

“I have learned that life is too precious not to live wholly and fully, to seek joy without compromise or hesitation, and I happily invite you all to accompany me on its capricious journey.” — Anastasia Vorobyova

“The list of people in Miami who can leave me speechless has one name on it: Anastasia. And that’s before she gets to the piano. She is my refuge, mi reina, and what I never knew I always needed. God, how I love her.” — Tempest Pax

“Sometimes I think I want to be her, standing next to her makes me feel like a silly little girl. She’s like the most beautiful woman I’ve ever met, but really? Ana, she like inspires me to not be a different me, just try and make the best me out of me I can.” — Isabella

“I would kill for her. I’d kill for a lot of people, but for Ana I wouldn’t even blink.” — Teagan

“Up in the club… you think there’s anything we can’t do if we together? Now that you got that mental image… you’re welcome. Seriously though. She’s good people… Not like me. but maybe if I hang out around her some of that goodness will wear off…. or maybe not. but hey, she’s easy on the eyes at least.” — Lex

“Such kindness in a new city is so welcomed. I feel you are the good omen I was seeking. A follow creative mind makes a wondrous roomie.” — Atoli

“I know I’m a monster. My kind aren’t known for compassion or kindness, but for her, I’d almost be a hero.” — Jeremias

“Words are hard and messy and I’d need three different languages to say exactly what I want. Lucky for me, I do. Empalagar Hada-Umma-Izi con las orejas mďż˝s lindas que he visto.” — Josie

“We’re often referred to as Sovereigns. Ana bears it truer and more gracefully than most of us and the outside glamour is backed by the inside warmth, compassion and empathy that’d befit a real Princess. Sometimes the stories dont lie… and sometimes music is all the magic you need to make the world come alive. Thank you for sharing your song with me…” — Juan Perez

“Fairest tend to get a stereotype of high and mighty with the mere veneer of ‘royalty’ over brow-beating thug. With Ana it’s no veneer, she honestly does keep herself to the more lofty standards others of her Seeming pay lip service to. Also, no doubt about it, if she wanted to pull out the stops, she could probably give classic Sirens, Lorelei, and Rusalka a run for their money.” — Marci Carnisera

“When we first met it was on blind faith for an interview. I had no idea what I was walking into. When I walked out, I left with a new friend. I cannot say that for almost anyone else. I don’t care easily or often, but I do with her. Her strength inspired me to give a shit about myself. Reminded me that I didn’t deserve what was happening to me and I had to keep fighting to make it stop. Not just for me, but for women like us.” — Margo Royal

“I never thought I’d be lucky enough to have a family. I can not even express what it’s like to have a home. Not four walls and a roof, but two moms and arms I always know I can fall into. I’m so grateful to have you as part of my family, and part of my heart.” — Rafi

“Anastasia is amazing. Beautiful, caring, fun. It’s not every day you get to meet a real Queen; even rarer one together with another Queen. And besides that, she’s one of the few who speaks a language better than I can: Music.” — Lyra Wolf